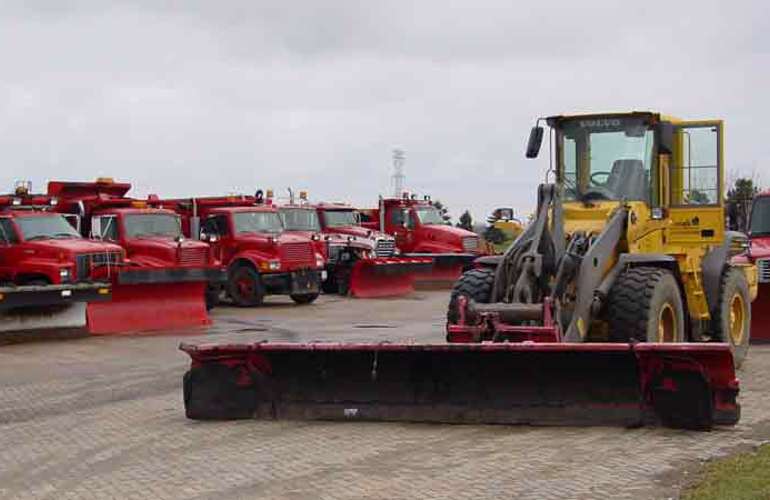 When winter ends, another phase begins for major snow removal services; when winter ends, it’s time to start preparing the fleet of snow removal equipment for next season. At A.R.T. Fleet Service, we have more than 30 snow plows, as well as a wide range of trucks and tractors to push them and the salters to follow along behind. When Old Man Winter throws his worst at Northern Illinois, Lake and Cook County businesses, government agencies and residences are counting on their snow removal services to stay ahead of the storms. Drivers of snow plows may work in shifts to clear the snow while the snow removal equipment is called upon, if necessary, to work around the clock.

The A.R.T. Fleet Service maintenance department is charged with ensuring that, by mid October, our fleet is ready to go for another winter, whether mild or harsh. Yes, maintenance continues throughout the winter but that doesn’t mean much if the snow removal equipment isn’t ready to go out of the starting gate. Besides, with really heavy snows, there isn’t time to catch up on maintenance that should have been completed in July or August.

During the summer, trucks are tuned and maintained to extend their lives and ensure reliability. Engine-block heaters under the hood are checked so that they’ll keep the engines warm and ready to start no matter how low the temperature goes. The yard has electrical outlets strategically placed throughout so that each truck’s engine-block heater is within reach when parked waiting for the next snowfall.

Snow plows are cleared of rust and repainted. If need be, metal that had deteriorated is cut away and replaced. The hydraulic systems of snow removal equipment are cleaned, tested for leaks and given the maintenance department’s seal of approval before they given the go ahead to clear the snow.

Maintenance also extends to the smaller hand tools used for snow removal. The metal edges of hand shovels are examined and repaired. If beyond repair, they’re replaced. Heavy duty snow blowers are good for four to five years of hard work if they’re maintained properly. That means that, each year, some snow blowers are replaced while the others are tuned for the season ahead.

V-Box spreaders are checked and maintained so that the salt and de-icer will spread behind the snow plows. The storage garage is stocked with 600 tons of salt. That will do for a while. But, in a heavy winter, three-to-four times as much salt is required.
Share:

Hydraulics pump up the capacity

Spreading road salt is a science

Top 9 things to look for when se